Difference between Reach vs Impression in Digital Marketing 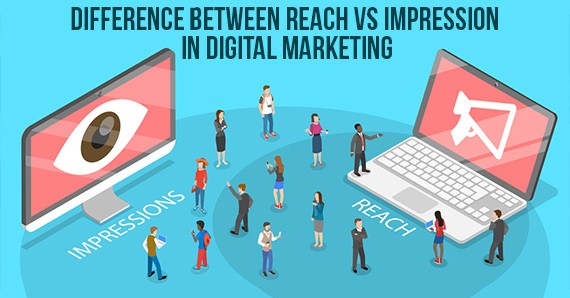 On different platforms, reach and impressions have different meanings. For example, what Facebook calls "impressions," Twitter used to call "reach."

However, They do describe two notions in general: The total number of people who have seen your ad or content is referred to as reach. If 100 people have viewed your ad, your ad has reached 100 people. The number of times your ad or content has been displayed on a screen is referred to as impressions. Let's imagine your ad from the preceding example appeared 300 times on those individuals' screens. That means that the ad received 300 impressions. Webpulse solution pvt ltd offers one of the Best SEO Services in Delhi. They share some differences between reach vs impressions in digital marketing. Let's take a look at how each major platform defines the two phrases to see how they work.

1- Reach vs. impressions on Facebook: According to Facebook, "reach" is defined as "the number of people who saw your advertising at least once." Organic, paid, and viral reach are the three categories in which it is organised. The number of unique people who saw your content organically (for free) in the Facebook News Feed is referred to as organic reach.

Paid reach refers to the number of individuals who saw a paid piece of content, such as an ad, on Facebook. Factors such as ad bids, budgets, and audience targeting can all have an impact.

The amount of people who viewed your content because one of their friends interacted with it is known as viral reach.

On Facebook, reach is distinct from impressions, which are defined as "the number of times your advertising appeared on screen" by Facebook. During the campaign's lifespan, a single user might view a post three times in their feed. That's a total of three impressions.

So, how can we tell if any of the "reach" or "impressions" we're getting are genuine? Facebook separates impressions into two categories to address this question: "served" and "viewed."

When an ad is "served," it simply means that it has been paid for and that the system has opted to deliver it to a specific location (to the top of a highly-visible news feed, an ad box in a sidebar, etc.).

To be counted as a "served" impression, advertising doesn't have to display on screen (they can stay "below the fold," as Facebook puts it) or even finish rendering.

The ad is not considered "viewed" if the user does not scroll to see it or navigates away from the page before it loads.

2- Impressions vs. reach on Twitter: Because Twitter doesn't track "reach," the reach vs. impressions debate is a little easier to answer. An "impression" is defined by Twitter as any time a Twitter user sees one of your tweets in their feed, search results, or in the context of a conversation.

Assume you have 1,000 followers, and each and every one of them sees your most recent tweet (or ad). That indicates the tweet was seen 1,000 times. Let's say you respond to that tweet with a follow-up tweet. Your followers will see the original tweet as well as your response. This will result in an additional 2,000 impressions, bringing the total to 3,000.

According to the Delhi’s Best Social Media Optimization Service, Remember that how you use the platform will have a significant impact on the average number of impressions each tweet.

The Ultimate Guide to Google Analytics for Freshers

How To Choose The Right Digital Marketing Agency?

6 Points to Make an Efficient SEO Strategy For Local Business

Things You Must Consider Before Designing a Logo

Organic Search vs Paid Search: What are the Major Differences?