UPDATES TO THE HISTORY OF THE GOOGLE ALGORITHM 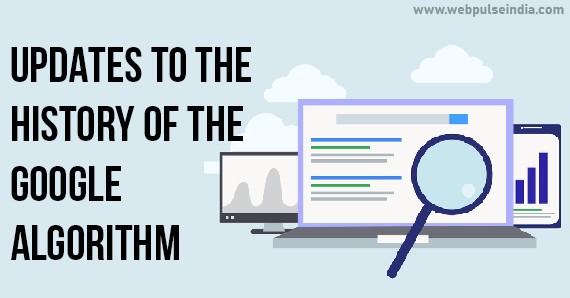 Google Algorithms: The algorithms used by Google to retrieve material from its search index and offer the best possible results for a query are complex systems. On its search engine results pages, the search engine uses a combination of algorithms and several ranking parameters to offer web pages rated by relevance (SERPs). In its early years, Google's algorithms were only modified a few times. Every year, Google makes thousands of updates. The majority of these modifications are so tiny that they are barely detected.

Webpulse Solution Pvt Ltd (the SEO Company in Delhi) has prepared a comprehensive list of Google algorithm releases, upgrades, and refreshes over the years, as well as connections to resources for SEO experts interested in learning more about each of these changes. However, the search engine occasionally makes major algorithmic adjustments that have a large impact on the SERPs, such as:

It made it much easier for Google to crawl and store data. "Caffeine provides 50% fresher results for web searches than our previous index, and it's the greatest collection of web content we've supplied," Google says. - From Google

This algorithm adjustment was done as part of a larger effort to speed up the internet and satisfy the demands of an ever-increasing internet. To support this overarching objective, Google declared around the same time that site speed would be a Google ranking indication.

Impact on SEO: Although the Caffeine index update did not provide any new ranking factors, it was part of Google's larger "speed up the internet" push, which included the addition of desktop site speed as a new ranking signal and emphasized the importance of website performance. Caffeine improved the user experience by allowing Google to index more stuff on the internet.

Impact on SEO: Many members of the SEO community were forced to adjust their strategies. Black hat SEO practices like keyword stuffing were no longer successful, and SEOs had to adapt by ensuring that content provided genuine value to readers and properly answered search queries.

3- Penguin Update (2012): The Penguin algorithm update was designed to target websites that were using manipulative link-building strategies and had a webspam. It was dubbed the "webspam algorithm update" by Google. As a result of this improvement, the system can now determine if the links pointing back to a specific website are authentic or spam.

Impact on SEO: The Penguin update also targeted black hat SEO practices, which had an impact on SEO. Manipulative link-building strategies were no longer effective, and backlink profiles with a large number of low-quality connections saw a drop in organic traffic and ranks.

Impact on SEO: Users may more easily find the most appropriate sites to answer their questions after the Hummingbird upgrade. This incentivizes the search community to dig deeper into the search intent behind specific terms and attempt to optimize for it.

Impact on SEO: The pigeon upgrade wreaked havoc on the local search community. It enabled small enterprises to contact a local audience more easily. Small businesses may now enhance their chances of ranking by implementing fundamental SEO best practices, such as obtaining backlinks and increasing domain authority. Pigeon has also made it more vital for small businesses to localize their content as local, follow local SEO best practices like acquiring local reviews and use structured data markup to be easily shown in rich results for local queries.

Technical SEO Vs Content Marketing: Which is the Best for SEO?

How to Improve Your Brand Awareness?

Take Advantage of the Right SEO Strategy to Increase your Profits